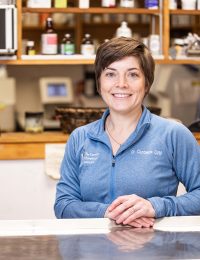 Stacey Contakos completed her BA in Biology at Ithaca College in upstate New York. After completing her bachelors she moved to Massachusetts and worked as a research assistant at Harvard Medical School. In 2004 she was awarded her Master’s degree in Developmental Biology from Tufts University. Stacey then moved to the Midwest and received her DVM from the University of Illinois at Urbana-Champaign in 2008. After graduating she remained at the University as a pathology resident where she was actively involved in research creating a mutant strain of pox virus intended to be used as a cancer therapeutic agent. Her clinical interests are in oncology, metabolic diseases, and incorporating alternative therapeutics such as acupuncture into everyday practice.

Stacey met her husband, Jonas, in college and it is no accident that they decided to settle in such a beautiful area. Jonas and his family have a long history with the region having worked for the Outward Bound program for over 20 years. Stacey and Jonas have four beautiful children, Camden, Mason, Simon, and Gwen. Stacey and Jonas currently own and run the North Atlantic Gymnastics Academy.